What Is Vertical Farming? – Bitcoin Value

What Is Vertical Farming?

If you, like me, have been hearing a lot about vertical gardening/farming you are also probably asking yourself what is vertical farming? Since this seems to be a trend that is going to be around for a while, I investigated. I found out exactly what vertical farming is and what makes it such a big deal these days. 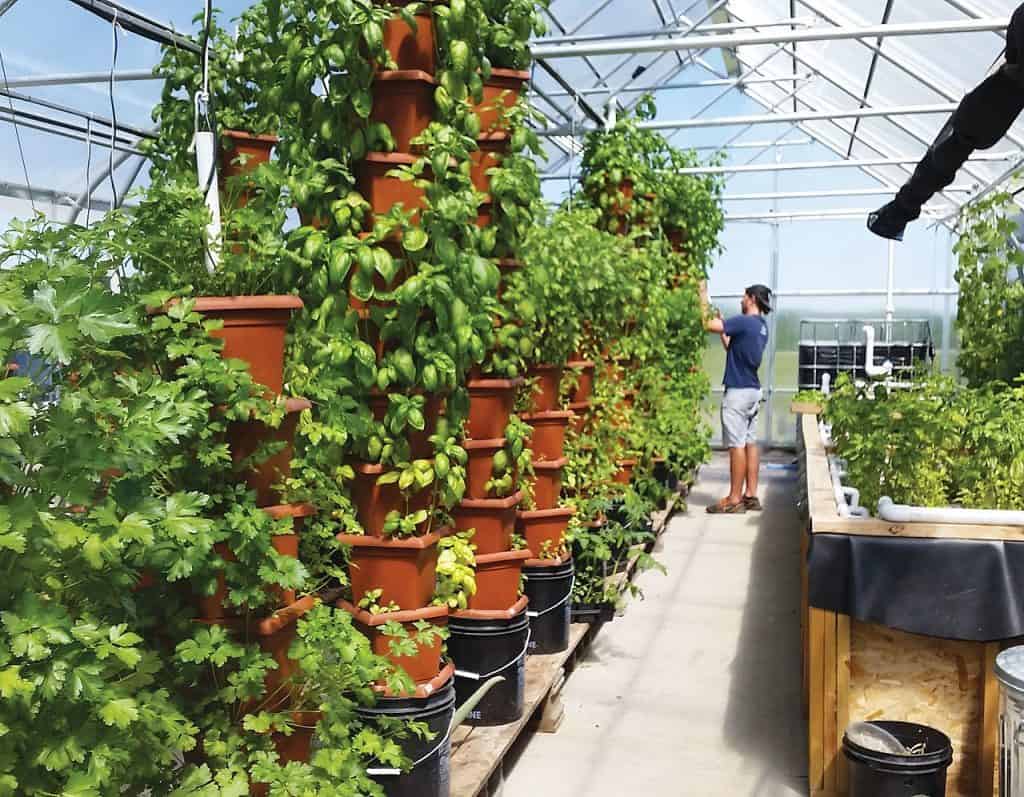 Vertical farming is the act of cultivating plants in stacked layers to save space and increase yield. So, basically, it is any garden or farm where crops are stacked one on the other. This is done to increase the number of plants you can grow in a limited amount of space. 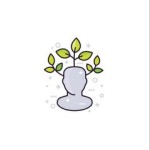 Sounds interesting right? Well, I was intrigued and wanted to learn more so I continued to dig and found some pretty thought-provoking information. Vertical farming has been around for a while and could have an impact world-wide. Keep reading to learn all you could ever want to know about vertical gardening! 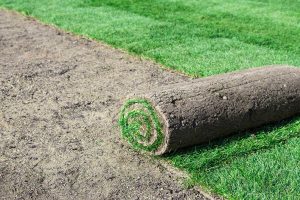 The History of Vertical Farming

Vertical farming is not a new concept, it has been used by different cultures throughout history. It seems that people have naturally drawn the conclusion that when you can’t spread out, then you have to spread up. 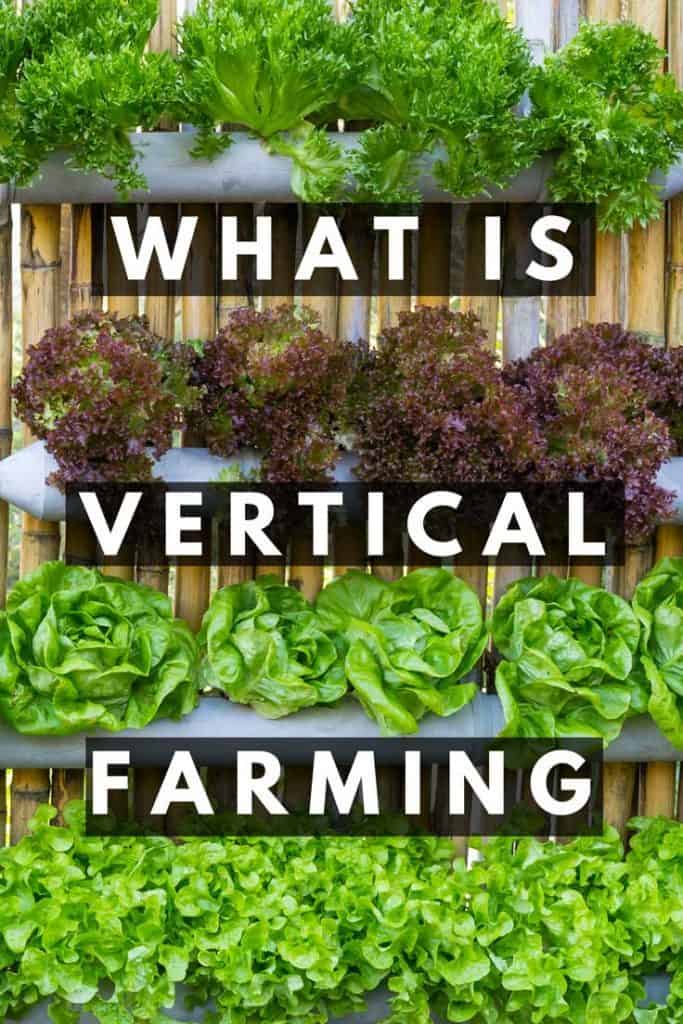 In South America the indigenous people used vertically layered techniques to grow more in limited spaces. East Asians used terraces to increase their rice yield exponentially. Since then, many have believed it could combat the issues of over-population and decreased food production.

In 1915 American geologist Gilbert Ellis Bailey coined the term “vertical farming,” prior to that there wasn’t a single term used to describe this technique. Over the years architects and scientists have looked at ways to use this method of farming. 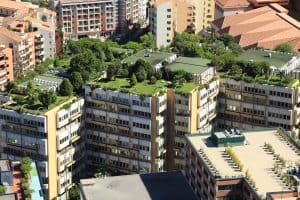 In the 1950’s a Danish farmer tried to grow herbs in a factory to achieve mass production. This was the first documented case of integrating a building into agriculture practices. Once the two ideas merged it was easy to see how they could be incorporated to the betterment of all. 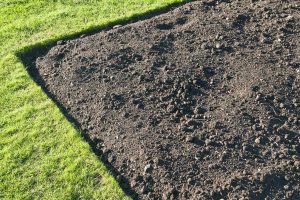 In 1999 a professor, Dickson Despommier, asked his students to feed the population of Manhattan, then around 2 million people, using only 13 acres of rooftop gardens. The class came to the conclusion that using typical gardening methods would provide enough food for only 2% of the population. 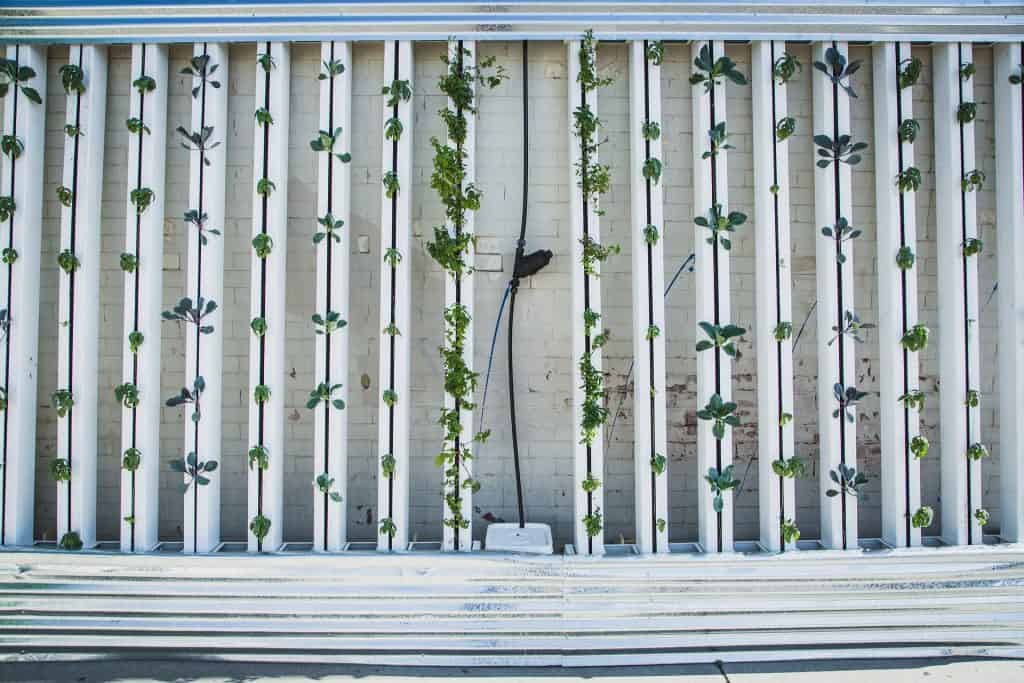 Despommier disliked this conclusion and jokingly suggested growing plants indoors using vertical farming techniques. From there, he began to really research and plan how a farm could be housed in skyscrapers. 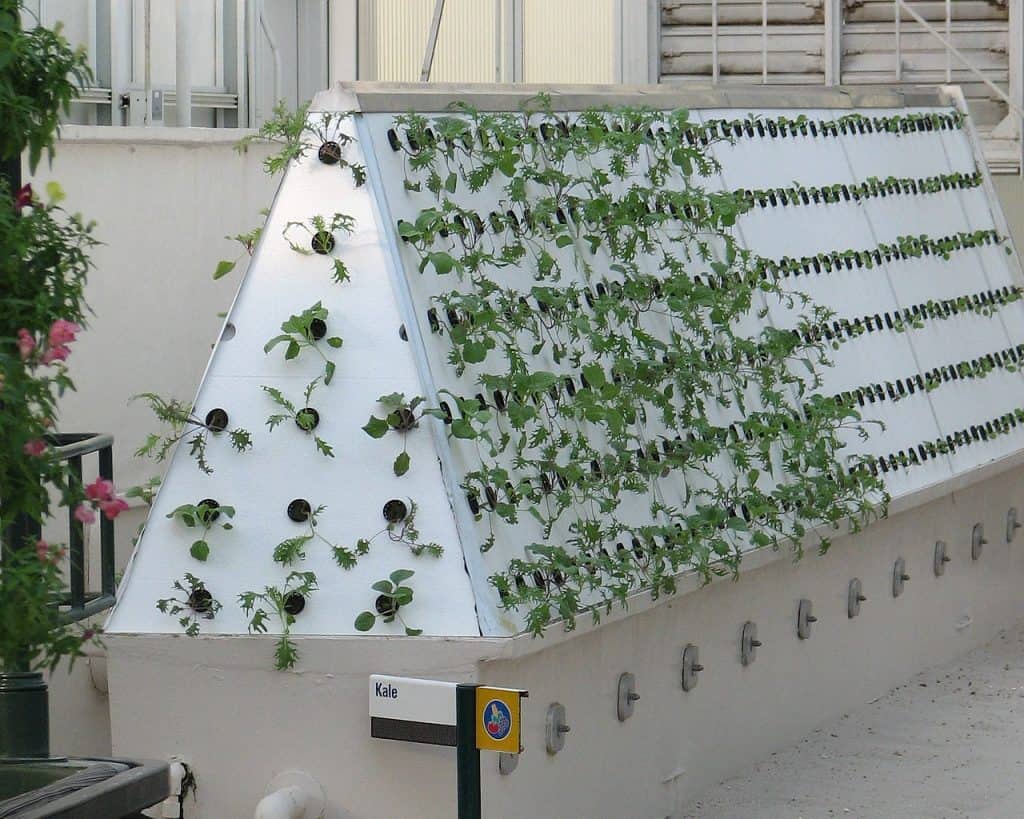 By 2001, the first vertical farm was outlined and people began designing and producing these urban farms. As media interest increased, others started building on these ideas and finding ways to improve on them. 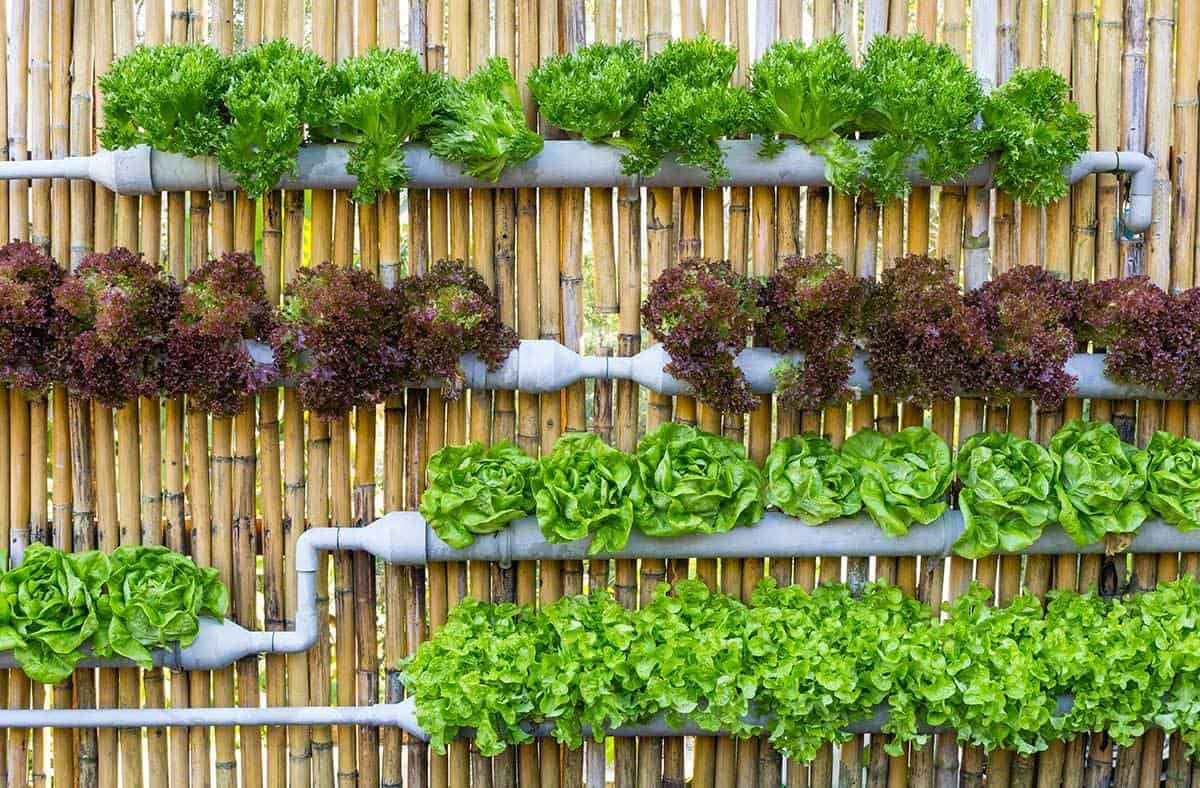 In 2011 a plant in Chicago introduced an anaerobic digester which allows the farm to operate off the energy grid using waste from nearby buildings.

Back in 2013 in Munich, Germany the Association for Vertical Farming was founded. It is an organization dedicated to promoting the growth of the vertical farming industry through education and collaboration.

Today vertical farming is used in urban areas so that produce can be grown in fully controlled vertical indoor environments. A lot of research is being conducted in the US, Europe, and Asia to develop this concept and find the best way to integrate it into today’s world.

There are multiple vertical farms operating in the United States, including Vertical Fresh Farms in New York. Another one is operated by the US Defense Advanced Research Projects Agency.

New advances are constantly being made to improve vertical farming and make this a sustainable, and profitable, way of farming.

The United Nations predicts that by 2050 the population of the world will be larger than 9 billion people. Yet there is no way to increase the amount of land available for food production.

The more people in the world, the more food we will need. Yet, there is no increase in land to grow the food. Most cities have already gone vertical, skyscrapers are everywhere so that people can live and work in areas with limited land to expand on.

So, why not use this same concept for farming? Or on a smaller scale, for people living in apartments or condos who want to be able to have gardens?

Vertical farming has led to many different innovations within the field. There is a lot of research being done to find the best possible way of growing crops in order to reduce the negatives and increase the yield.

Hydroponics is a process that involves growing plants in a solution of nutrients almost completely free of soil. The nutrient solution is frequently circulated and monitored so that the proper composition is maintained.

Aeroponics was introduced by NASA in the 1990s to grow plants in space. It involves growing plants with very little water and no soil. It is a promising concept as it uses 90% less water than hydroponics and creates plants that are healthier and more nutritious. However, this process has not been studied as a technique used outside of space.

Aquaponics is similar to hydroponics but considered better because it incorporates fish into the process. The fish help circulate the water and create nutrients in the form of waste while the plants feed the fish and purify the water. This process maximizes efficiency and increases the production as the fish are also able to be sold.

The Advantages of Vertical Farming

Indoor farming allows farmers to produce crops year-round which multiplies the productivity of an area by 4 to as much as 30-time normal farming! Based on this information, Despommier predicts that a 30-story building located on one city block could yield a crop as big as a 2,400-acre traditional farm.

Traditional agriculture is largely dependent on the climate. Moderate increases in temperatures and more carbon dioxide in the atmosphere could lead to an increase in crop production but this is only a fraction of the equation.

Soil moisture, water availability, nutrient levels, and many other aspects of farming are equally important. Global weather changes could cause a change in the frequency and severity of droughts and flooding. This would negatively impact the productivity of farms.

Vertical farming takes all of the guesswork out of food production, it creates environments conducive to growing with little to no surprises or unexpected issues.

Vertical farming would decrease the amount of traditional farmland necessary for crop production. This would allow the unnecessary land to be returned to its natural state.

Producing food inside also eliminates many other aspects of farming that are detrimental to the environment. This includes plowing, planting, and harvesting that is traditionally done by farm equipment.

The Concerns of Vertical Farming

Let’s look first at the potential economic impact vertical farming could have on the world. In theory growing more food would mean generating more money, right? Well, in reality, the answer to that question is not necessarily.

The buildings used to house these vertical farms would need to be powered so that the food could be grown. This would increase the fossil fuels used in the area. The cost of light, water, and space would be so high, the extra food produced wouldn’t be enough to offset the increase in expenses.

Where traditional farming relies on sunlight, rainwater, and the soil naturally found on the earth’s surface, vertical farming does not. This doesn’t eliminate the need for light, water, and soil. It just creates challenges of how to provide these necessary elements of farming.

With crops stacked, sunlight is unable to reach all of the crops so vertical farmers must provide supplemental light. This light has to come from a generated power source. This increases the amount of energy consumption and cost necessary to grow crops.

In addition, there would need to be plumbing and elevator systems in place to distribute the necessary nutrients and water to the crops. Between this and the temperature regulation, energy use within a vertical farm is much greater than that of a traditional farm.

As discussed previously, energy requirements increase drastically for vertical farms over traditional farms. This could potentially increase the amount of pollution produced depending on the type of energy used by the farm.

Greenhouse crops are also known to produce more CO 2 gases than field produce. Theoretically, since the crops are indoors, the gases are contained. Due to the ventilation necessary within a building some of the gases can leak into the atmosphere.

In addition, in order to keep crops in a vegetative or reproductive stage the lights within the vertical farm are kept on past sunset and turn on before sunrise. This creates a large amount of light pollution within the urban area which can compromise health, disrupt ecosystems, and spoil the aesthetics of an area.

Realistically, almost any plant can be grown in a vertical farm. That doesn’t mean all plants would be best served using this process. Current practices and research shows that the most economical and efficient crops are lettuces, kales, chard and collard greens, chives, mint, basil, and other small woody herbs.

There are many people incorporating the vertical farming process in their home gardens. Many people are using this idea to beautify ugly fences and patios, planting flowers in a vertical arrangement. Others are planting herbs in a vertical planter so that they can grow more in a limited space, like on their kitchen counter.

Whatever your reason for vertical gardening, there are many different options available to make this easy and efficient for you. Check out the other posts on this site for ideas on how to create your own vertical garden!

Ever wondered what large-scale vertical gardening is like? We’ve covered the topic in depth, as well as offering some tips for amateur gardeners.

How to Make a Recycled Pallet Vertical Garden

How to Make a Recycled Pallet Vertical Garden

How to Build Your Own DIY Vertical Garden Wall

15 Hanging Succulent Planters to Turn Your Walls Into Vertical Gardens