Today I discovered Pinterest, a photo-sharing website stylised as “an online pinboard”. It seems to be a classy, sophisticated version of Tumblr (I think to sign up you have to be invited by a current user. This is probably the strategy to keep TB’s away). On their homepage are previews of some of the things that have been “pinned” there so far. 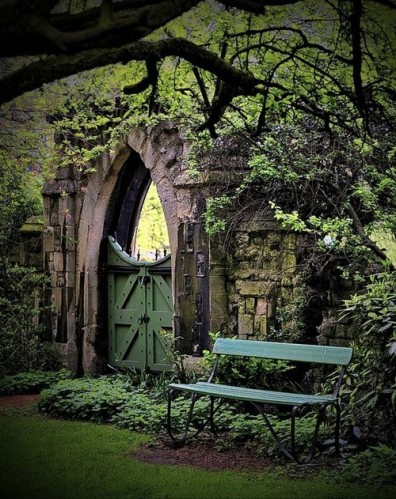 Here are two handfuls of my favourite images:

It’s probably the quality of the water and how the light passes through it, but the baby hippo looks fake. Even so, this photo’s adorable!

Iwill buy a whole bucket of crayons just to try this!

I don’t know about you, but I’m laughing my butt off!

So cute! Makes me want a pug even more!

Someone commented on Pinterested saying that this is how they envision the door to the Secret Garden. I beg to differ. I think it quite looks like the door to Narnia that Eustace and Jill enter from their school in The Silver Chair. #narniageek

This has also been labelled as being the Secret Garden door. I also think this could be the door at Experiment House to Narnia.

… and here is a great story:

It was a busy morning, about 8:30, when an elderly gentleman in his 80′s arrived at the hospital to have stitches removed from his thumb. He said he was in a hurry as he had an appointment at 9:00 am. The nurse took his vital signs and had him take a seat, knowing it would be over an hour before someone would be able to see him. I saw him looking at his watch and decided, since I was not busy with another patient, I would evaluate his wound. On exam, it was well healed, so I talked to one of the doctors, got the needed supplies to remove his sutures and redress his wound. While taking care of his wound, I asked him if he had another doctor’s appointment this morning, as he was in such a hurry. The gentleman told me no, that he needed to go to the nursing home to eat breakfast with his wife. I inquired as to her health. He told me that she had been there for a while and that she was a victim of Alzheimer’s Disease. As we talked, I asked if she would be upset if he was a bit late. He replied that she no longer knew who he was, that she had not recognized him in five years now. I was surprised, and asked him, ‘And you still go every morning, even though she doesn’t know who you are?’ He smiled as he patted my hand and said, ‘She doesn’t know me, but I still know who she is.’

Touches My Heart by Denise

Also on Pinterest I came across a lot of photos of really nice places that I’d like to visit one day. So I’m gonna start up a ‘Places I’d like to go’ category tomorrow.

Today I discovered Pinterest, a photo-sharing website stylised as “an online pinboard”. It seems to be a classy, sophisticated version of Tumblr (I think to sign up you have to be invit…