This box started out as a base for my pantorouter tradeshow display, but I miscalculated the height I needed, so I couldn’t use it for that. Not wanting to waste wood or effort, I figured I’d turn this one into a storage box. 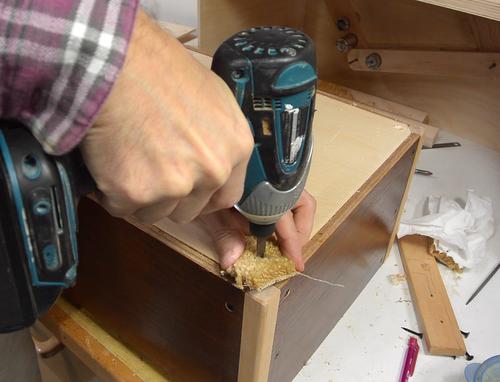 What’s neat about this box is how the corners are joined.

The corners are cut from square pieces of hardwood (maple) to have two rabbets on them where the plywood is screwed on, but leaving the outside corner as solid maple. 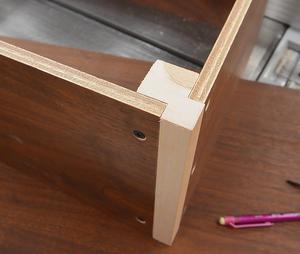 I cut a chamfer for the inside corners of the box to not protrude as far in, but leaving enough material for the screws to screw into. 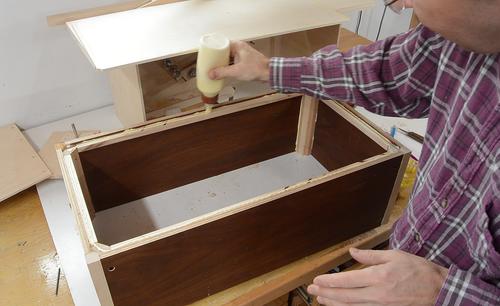 The box also needs a bottom. For that, I cut part of the corner rails a bit shorter.

This way, I can inset the bottom into the box a bit. Some extra rails glued to the sides of the box give more support for the bottom.

The plywood I’m using is already varnished. To get the glue to stick I’m scraping off the varnish where it’s joined. 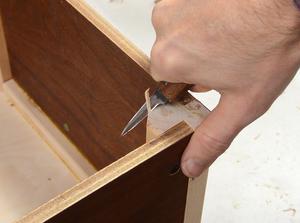 Then gluing the rails for the bottom onto the sides…

… followed by gluing on the corners. I had some glue squeeze-out, which I’m wiping off with some sawdust.

Screwing together the box while the glue for the rails is still drying. 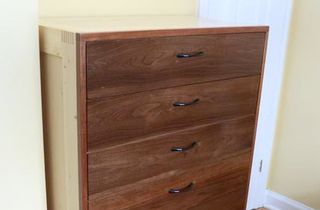 Fourth side going on.

Then applying lots of glue for the bottom.

The bottom has the corners chamfered to fit in the space around the corner rails.

I used some weights and clamps to hold the bottom on while the glue dries. I didn’t use any screws or nails for it. 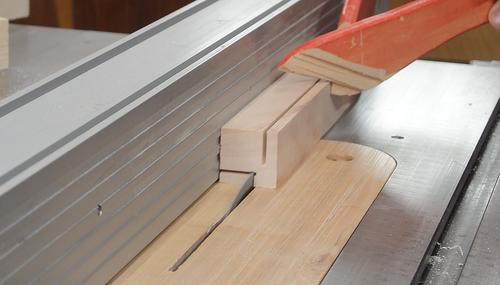 I added an old (recycled) drawer handle to one side.

I screwed some old pieces of carpet to the corners to make the box slide nicely on the hardwood floors.

Ialso messed up with one of the rails – I cut the notch on the wrong side, so had to cut it again on the other side. But that actually looks better than the other corners. If I was doing it again, I’d notch all the rails on both ends! 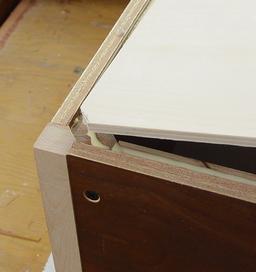 This box goes under the crib in the baby’s room. Much like my under bed drawers with wheels, but this one is smaller, so easy enough to slide just on the floor.

The beauty of this technique is that it’s well suited to using relatively thin and pre-finished plywood. A downside is that if you want to use the box to store other boxes, the corners get in the way.

DIY: A Quick and Quirky Candleholder

Getting Started in Woodworking

DIY Pallet Projects: Everything you need to know

10 Easy Things to Build and Sell for Money

DIY: A Quick and Quirky Candleholder

Getting Started in Woodworking

DIY Pallet Projects: Everything you need to know

10 Easy Things to Build and Sell for Money