As keen festival goers, today’s lovely couple were engaged at Glastonbury festival in 2014 in front of a rather large crowd. They then decided to bring the festival vibe to their nuptials and spent the next 2 years planning their dream wedding celebrations. 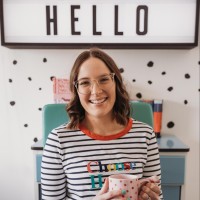 WWW readers Lucie and Andrew were hitched on the 11th June 2016 and hosted their wedding party in a gorgeous back garden. They set up a pole tent marquee, campsite, bar tent, bell tent and fire pit area. It looked and sounded pretty incredible to be honest, even the soggy weather didn’t really impact on their plans. Everyone donned wellies and ponchos in the true festival spirit to party the night away. There to entertain and bring the tunes to the evening festivities were WWW Supplier Love members Deckheds.

Emma Boileau Photography, thank you so very much for sharing these joy filled happy shots with us.

THE PROPOSAL | At Glastonbury 2014. We were on the hill at the Park on the first night, Andrew thought he had taken me to one side but when he got down on one knee the whole hill started clapping and cheering, we were in front of hundreds of people (no pressure). All our friends knew and they had taken up tambourines and managed to film it.

THE VISION | A mini Glastonbury. We wanted a real festival party, with lots going on, but at the same time, keep it simple and not get caught up in what people think a wedding should be. We wanted people to have a really good time. We wanted lots of colour, unexpected things to discover around the garden, games, a chill out tent and an amazing dance tent.

THE PLANNING PROCESS | We decided to plan over 2 years as we didn’t want planning to take over everything else and it gave us time to DIY as much as we could. I found all the traditional magazines and wedding shows overwhelming at first, so much I had never thought about or realised existed. We made a list of what we needed to do and dealt with things in chunks.

BUDGET | We saved in a lot of areas by doing things ourselves, asking people to help out or deciding things weren’t needed. My mum did my flowers and made hundreds of meters of bunting. But we did go over our initial estimations on a few things, but we didn’t mind as these were key to people having a good time – food, drink and music.

THE VENUE | The plan was always to have the wedding in Andrew’s parents back garden as we had always wanted something more laid back. They live in such beautiful surroundings in The Trough of Bowland. We hired a Victorian big top marquee and we also had a separate bar tent, bell tent, fire pit area surrounded by trees and a camping field.

THE DRESS & ACCESSORIES | The dress was by Rembo Styling, bought from Case of the Curious Bride.

Shoes and Wellies by Vivienne Westwood for Melissa – I have a few pairs already which are really comfy and practically thinking, the rubber can’t be ruined by wet grass!

I tried on veils and head pieces but decided they were too fussy for the look I wanted, so I ended up going with a few bits of dried gyp in my hair.

Lace cat ears were from Damaris, I had my eye on them for a while but they were over budget then one of my bridesmaids spotted them on a flash sale!

FINDING THE DRESS | My initial idea was to wear red and I was set on the idea of really not doing the traditional thing. But I was persuaded (told off for being stubborn) by my maid of honour, that this was the one time I could wear white and she thought I would regret it if I didn’t. I tried on a few dresses at a more traditional dress shop, and didn’t find anything to make me change my mind, but then we went to Case of the Curious Bride and I ended up with the first dress I picked out to try on. A similar shape and style to what I had in mind, just a different colour. (I’m glad I listened to her.)

GROOM’S ATTIRE | The suit was tailor made at House of Fraser, Andrew picked all the details and colours, to compliment his pride and joy cherry red Loakes. I made the bow tie and pocket square and I designed the fabric to match the flowers and colours we would be using for the decorations.

THE READINGS & MUSIC | Music was always key for us to getting the party atmosphere right. We wanted to have a festival style set list, where we/friends created a playlist for us and so we could create a play list displayed so people knew what was going on. When we met Karl and Kate from Deckheds, they loved this idea and were so understanding and accommodating to helping us make it work.

BEAUTIFUL BRIDESMAIDS | The bridesmaids all wore completely different dresses, but that matched through the floral prints. They are all different sizes, shapes and personalities, one dress wouldn’t suit all, and I wanted them to have a dress they would be happy in and wear again.

THE FLOWERS | We wanted to keep it simple. We went with Gypsophila for the bouquets and buttonholes and in the marquee we went for single stems of flowers lined up in bottles. We used a mix of real and fake flowers as I wanted poppies and cornflowers but didn’t want them to die, as we knew we would be setting it up ourselves on the Thursday/Friday. My mum was in charge of flowers and made all the bouquets and buttonholes, with a snapped tendon in one of her fingers!

THE CAKE | Again, we just wanted to keep it simple. When I first saw the idea of a naked cake I thought it was just what we wanted. We went for pimms flavour sponge with buttercream and pimms jelly, topped with fruit. This was to match the pimms we served as a welcome drink. We served the cake as the pudding because we didn’t want the fresh cream and fruit to spoil and go to waste.

YOUR PHOTOGRAPHER | Emma just captured the feel of the day perfectly. It was so lovely to get the photos back and see the story of the day and see everyone smiling and dancing all day long. We found Emma by searching through a lot of blogs, and seeing a lot who we just didn’t feel would get what we were wanting. We liked her unintrusive, laid back style, nothing forced or formal.

THE DETAILS & DÉCOR | We wanted to DIY as much as we could to make it really us. I did all the graphics for the invites, order of service and set list posters, all designed in the style of Glastonbury free press posters.

Wristbands and lanyards were given out as people got to the garden. The lanyards had the order of the day, the menu and the music set list/running order.

The festival flags were really key in getting that festival feel and they made such an impact. You could see them on the drive back from the church.

Disco balls in trees with uplighters to make them sparkle at night.

Bunting – lots of it. The bunting outside the church and inside the marquee used the same fabric as the grooms/ushers pocket squares. Inside we kept it more themed, outside we just wanted colour.

The animal fancy dress box – essential festival wear, it was brilliant to see family members in frog headbands, tiger tails or as a panda or pidgeon!

The rain ponchos were a great last minute purchase when we realised it was going to rain on the day. These were given out so people could carry on the party outside.

THE HONEYMOON | We are having 3 weeks in Japan next March/April. Seeing as we have lived together for a few years, we suggested contributions towards our honeymoon fund as a present. We weren’t going to go away straight after the wedding but 2 weeks beforehand when we were feeling the pressure, we booked a week in Kefalonia for after the wedding. It was where we had our first holiday together and a week of quiet and calm was just what we needed.

MEMORABLE MOMENTS | Father John in a pair of tiger ears on the dance floor was a highlight. The father of the bride was up throwing some northern soul shapes as the starter was being cleared away. Andrew and Thomas’s rendition of ‘Oh Well’ during the best mens speeches.

ADVICE FOR OTHER COUPLES | Don’t get hung up on small things on the day running perfectly to plan. Our day didn’t, it rained, all day, which meant we had to run out of church to the car, we couldn’t play all the outside games, we didn’t put all the outside candles and lanterns out, but it really didn’t matter. People came with umbrellas and in wellies and made the most of it.

We got told by a number of couples that the day would go by so fast and we didn’t pay proper attention to this. It really did fly by and we feel we missed quite a lot happening, before we knew it, it was 4am and the last few of us up were huddled around the fire pit and I totally missed the cheese and onion pie I was most looking forward to!

CREDIT WHERE CREDIT IS DUE |

The Mothers – Ann and Carol – we could not have done it without them.

Boutique | The Case Of The Curious Bride

A truly memorable celebration for all I am certain.

As keen festival goers, today’s lovely couple were engaged at Glastonbury festival in 2014 in front of a rather large crowd. They then decided to bring the festival vibe to their nuptials and spe

This Dreamy Secret Garden-Inspired Wedding in Baltimore Is Rustic Perfection

Wisteria: How to Grow This Deliciously Fragrant and Gorgeous Flowering Vine

Cyprus Save The Date Calendar Card Or Magnets

Everything You Need to Know About Wedding Planners

How To Get That Glorious Garden Wedding Theme | CHWV

This Dreamy Secret Garden-Inspired Wedding in Baltimore Is Rustic Perfection

Wisteria: How to Grow This Deliciously Fragrant and Gorgeous Flowering Vine

Cyprus Save The Date Calendar Card Or Magnets

Everything You Need to Know About Wedding Planners

How To Get That Glorious Garden Wedding Theme | CHWV

16 Stunning Summer Wedding Flowers to Embrace in June, July and August. #Part One