Nestled under a spreading lilac, terracotta chimney pots made by Mick Pinner poke their heads from a bed of ferns, wood anemones, Solomon’s seal and Euphorbia amygdaloides. ‘We wanted to have some sculptures with nice height in that woodland area, and the chimney pots worked well there,’ explains gallerist and potter Joanna Bird.

When Joanna first decided to open a contemporary ceramics gallery at her home in Chiswick, west London, in the early Nineties, she seized the opportunity to redesign her garden. Now she uses it to showcase her exhibits to their best advantage. ‘The garden was a really boring shape – it went in straight lines and was very angular,’ she says.

Her starting point was the magnificent, spreading lilac tree. Over 50 years old, the lilac was in the garden when Joanna and her husband bought the house in 1986. ‘It’s a focal point, because it’s a sculpture in itself,’ she says. ‘It has the most fantastic arrangement of branches; we built the garden around it.’

Today, Joanna opens her house and garden for exhibitions twice a year, in spring and autumn, so her garden has been designed to look good all year round. And for each show, which typically features 20 artists across a range of disciplines, she tries to find new, up-and-coming talent to show alongside the more established names. Originally trained by the Cornish potter Michael Cardew (who studied under Bernard Leach), Joanna describes herself as drawn towards a Shaker aesthetic: to pieces that combine beauty and function. ‘Because I’m a Cardew pupil, I’m quite vessel based,’ she says. ‘And I don’t like anything that’s too convoluted, contrived or fussy.’ 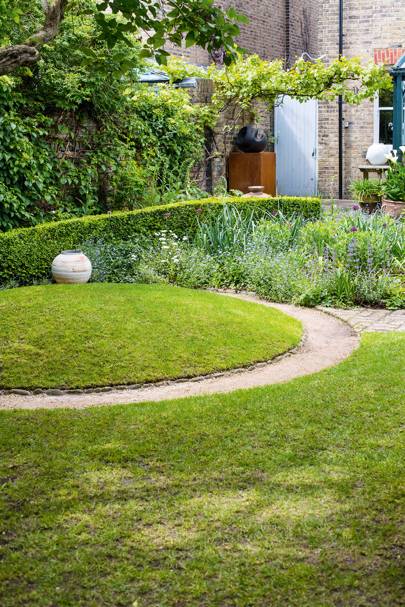 With the help of Simon Irvine (who designed the garden at Läckö Castle in Sweden), Joanna came up with a plan ‘to burst the walls open’. In a radical departure from the garden’s existing rigid shape, every line is flowing. (‘The eye wants to follow a curving line,’ she explains.) The design leads you on a journey through several distinct areas. ‘It’s beautifully balanced. From the deck, you can’t quite see what’s going on and it’s a metaphorical search for the holy grail; no matter which path you take, you keep going round and round,’ she says. Curves will be a theme of the upcoming selling exhibition Convex, Concave, which opens this month. Fergus Garrett of Great Dixter has supplied extra bedding plants to complement the ceramics that will be on display. 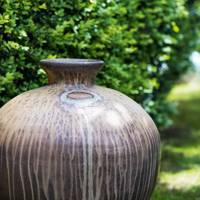 The south-east-facing garden has a wonderfully timeless atmosphere. Its host of secret corners gives the sculptures a real sense of place, and makes the 33 x 12-metre space seem significantly bigger. Last spring, the works dotted throughout the garden for Joanna’s show Necessities of Life included Svend Bayer’s wood-fired stoneware pots and Adam Buick’s luminous moon jars, which catch the light at different times throughout the day. 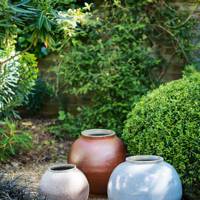 ‘I think vessels work particularly well in the garden,’ Joanna says. ‘There’s some synergy in both the materials and form that feels very organic.’ One particular grouping of moon jars has a seductive rhythm that catches the eye. Set against a large clipped box mound, it features a jar decorated with a shino glaze made from seaweed. ‘Adam throws the pot and then he likes to play around with materials,’ Joanna says. ‘So he’ll brush on china clay and sometimes he throws grit – there’s another pot here that has a spiral of grit on it. He’s very into texture.’ 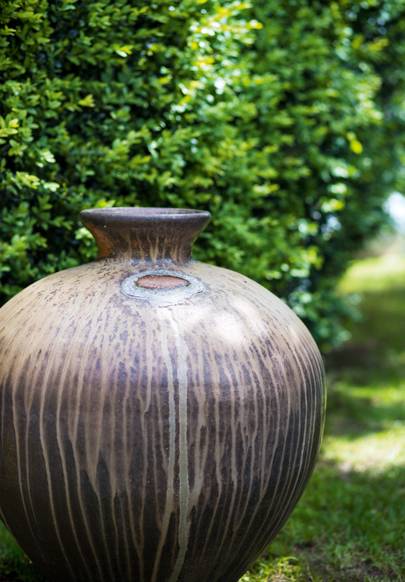 When it comes to the placement of sculptures in a garden, Joanna makes it sound easy. ‘It’s all done by eye – I choose what I think will go well together,’ she says. ‘However, you do need to find the right plant palette, one that doesn’t overshadow or dominate.’ Joanna selected the palette with the help of Tom Freeth, Michal Dvorak and Bradley Gangadeen of Kew Gardens, who recommended plants that would work with the sculptures. Throughout the space, evergreens such as box, Euphorbia mellifera and myrtle create a calm, neutral backdrop. Joanna is also a fan of architectural plants such as ferns, the black grass Ophiopogon planiscapus ‘Nigrescens’, white foxgloves and Rosa ‘Complicata’, which complement the pots. 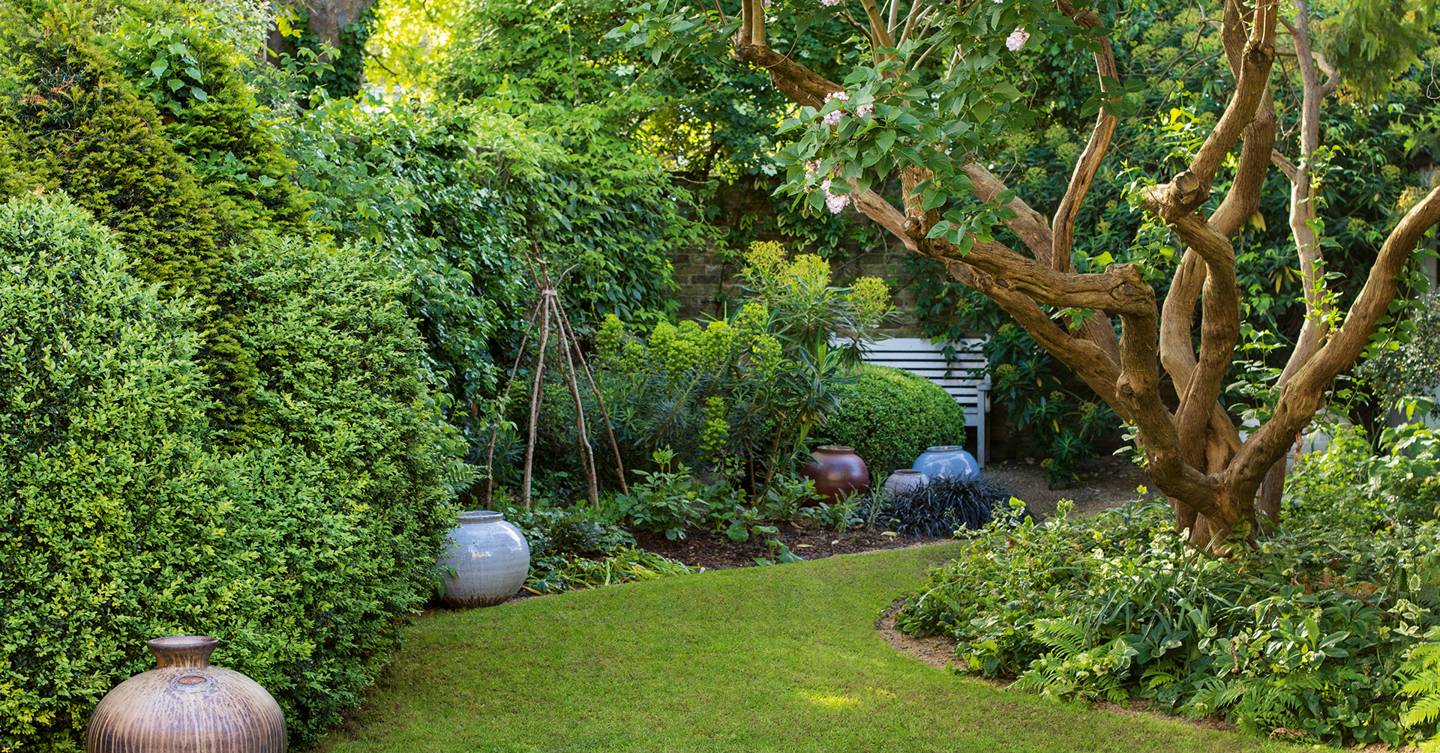 To add height to the garden, Simon came up with the clever idea of a raised grassy mound as a focal point. A gently sloping box hedge creates a feeling of enclosure. ‘The mound was a favourite of our children when they were young,’ Joanna says. ‘All the grass areas in the garden are puffed up like a patchwork quilt. The Aran stones bordering the paths act as stitches holding the grass down.’ Within the curve of the box hedge is a teardrop-shape bed of blue and mauve naturalistic planting, featuring alliums, Alchemilla mollis, hardy geraniums and perovskia. 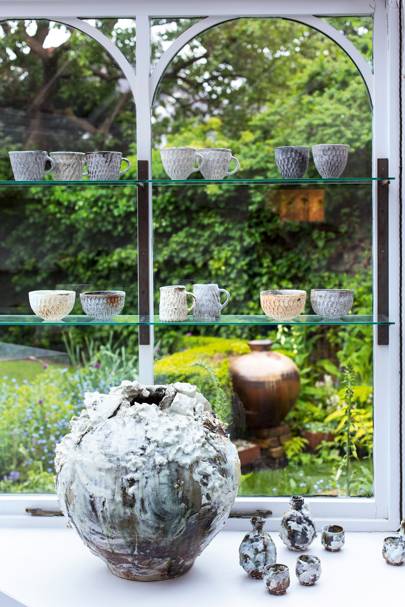 Displayed prominently on the deck by the house is Charcoal Blade Form, a dramatic stoneware sculpture by James Oughtibridge, whom she describes as an up-and-coming artist. ‘I like abstract work,’ she says. ‘A sculpture has to have a meaning for me – it has to come from somewhere and speak to me in some way’.

Joanna Bird garden – with the help of Simon Irvine, curator and potter Joanna Bird has turned her garden into an exhibition space, where modern sculpted ceramics meet calming evergreens

Please, Welcome to my Garden

Into the Woods for a Lot Turned into Magical Garden Rooms