Here’s a way to garden even if you have minimal space – a vertical garden ladder planter! It’s perfect for tiny backyards or a patio or balcony – even if you live in a small apartment in the city.

Made of cedar fence pickets, this ladder planter will hold up to the elements but only costs about $20 to build. It’s a beginner project and you only need a few tools to tackle it.

My friend Jen built this for her mother-in-law. She’s a beginner builder- I’ve asked Jen to share her tips and challenges as she built this tiered ladder planter – here’s from Jen:

After the last project I couldn’t wait to get started on this one. Another simple build with great results! What I like about this is it could be used as a regular flower planter, an herb planter, or as I did with herbs and flowers to mix it up a little. I got right to work and got all cuts done and layed out. Then I started attaching with the handy staple gun. Did I mention I love that thing! I’m pretty sure it’s my new best friend – quick and easy, that’s how I like it!

The compound miter saw is great for the angled cuts. I needed 10 of the end pieces at 15 degrees off square, not parallel. Instead of adjusting the miter from side to side I simply made my first end cut, then used it as a template to mark the rest of the boards as I cut. Then all I needed to do instead of adjusting the saw is flip the board each time I cut. It worked much better than how I invisioned it would in my head. 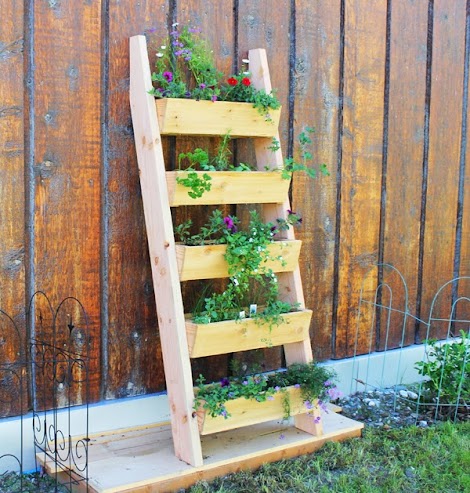 Once I had all the end pieces cut, I attached them to the sides with the staple gun.

Now for the frame. I was a little intimidated by the top cut, but my saw was already set to 15 degrees, so I just wacked the ends off parallel as directed in the cut list. Then I used a carpenters square to cut the back off the tops, perpendicular to the 15 degree top cut. It sounds complicated but it actually is easy. TIP: If you don’t have a carpenter’s square, just use a scrap of wood or even a hardcover book.

I didn’t have a circular saw, so decided to use the jig saw to cut this part. I haven’t really used a jig saw before, but all and all it went pretty well. I just took my time and was sure to stay on the outside edge of the line I had drawn. I won’t like, the first cut wasn’t perfect, but it worked.

After the first upright was cut, I used it to trace the line on the second board. Then, once again, used the jig saw to cut on the traced line. This time it went even better. Practice makes perfect! Now came the time to attach the boxes to the frame. I started from the top and worked my way down. I marked my starting point on both uprights at the same time for consistency. Then I screwed the box to one leg from the inside of the box, then placed the other leg and did the same.

Now I had a starting point for the rest of the boxes. So I cut a spacer at 6 inches (see photo below) to make the placing easier. Be sure to keep the spacer at an angle to follow the line of the first box attached. Once I had it placed I screwed the second box from the inside of the box to the frame, and so on and so forth with the rest of the boxes. It made it easier to turn the frame on its side to place the screws. Clamps are your friend here if you don’t have an extra hand.

Now all I had to do was stand it up, and there was the finished product, a beautiful versatile vertical planter!

Be sure to drill holes in the bottom of each box to allow for drainage. I drilled after it was all attached, but you could do it after building the boxes before attaching them to the frame. 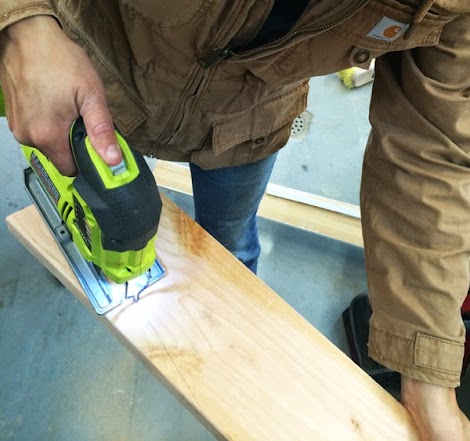 Now it was time to plant it! I showed my mother-in-law the planter and she loved it, so I decided it would look great in her back yard.

So off we went to get some flowers and herbs.

Turned out pretty well if you ask me!

It’s amazing what you can build with $20 bucks in lumber in a couple of hours!

I hope you have as much fun building this as I did!

How to Make a Vertical Herb Garden From a Fence

Grow More In Less Space With These Ideas

Plant herbs in a palette: This herb bed fits on every balcony

How to: Make a Modern, Space-Saving Vertical Vegetable Garden

How to: Make a DIY Outdoor Living Plant Wall

Best tips and ideas for small gardens you need to know

How to Make a Vertical Herb Garden From a Fence

Grow More In Less Space With These Ideas

Plant herbs in a palette: This herb bed fits on every balcony

How to: Make a Modern, Space-Saving Vertical Vegetable Garden

How to: Make a DIY Outdoor Living Plant Wall

Best tips and ideas for small gardens you need to know

How to Build Your Own Vertical Garden With Shipping Pallets