Deep in the Castelli Romani hills, 40 miles south of Rome, Torrecchia Vecchia is a place where nature and man have come together to make an extraordinary garden. Like the nearby Garden of Ninfa, it has been shaped around the ruins of a medieval village, giving it an air of romanticism and mystery only heightened by its magical setting in a landscape of untouched natural beauty.

Long abandoned, the 1,500-acre estate, including a walled hilltop village and ruined castle, was bought unseen by the late Carlo Caracciolo, an Italian newspaper baron, in 1991, as a financial favour for a friend who needed to sell quickly. He fully intended to sell it straight on, but when he and his wife Violante came to visit for the first time, they were immediately bowled over by the wild beauty of the place and made it theirs.

Violante decided she would make a garden. Inspired by Ninfa, she wanted something soft and romantic, full of scented English roses that would clamber over the ruins. She asked Lauro Marchetti, Ninfa’s curator, to supervise the restoration of the ruins and, later, to begin designing a garden. It took 18 months to free the ruins from the tyranny of brambles and ivy, and slowly the garden began to be lifted from its centuries-long slumber. One of the first steps was to find water – crucial in this sun-parched landscape. Lauro and his team began to dig a borehole, eventually reaching a spring deep underground. This allowed the creation of a subterranean irrigation reservoir and a narrow stream that tumbles down the slope in a series of rocky cascades before reaching a pool at the bottom of the garden. 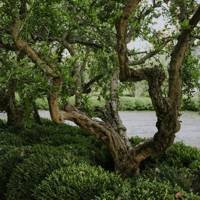 Lauro was increasingly busy at Ninfa, so Violante, who was driving the garden project – and anxious to see it taking shape quickly due to her ill health – took the decision to commission another designer to take the garden to the next stage. In 1995, she met Dan Pearson at the RHS Chelsea Flower Show and the following week at her passionate insistence he flew out to Rome. Immediately engaging with the place, he agreed to take on the project.

Inspired by the surrounding oak woods and sloping pastures of wild grasses, mint and lemon balm, he began to add new layers to the existing framework, planting shrubs and perennials in informal borders and festooning the ruined buildings with climbing roses and white wisteria. ‘Violante wanted a cool green and white colour palette and gave me a strict brief that helped to focus the design,’ says Dan. Rosa ‘Madame Alfred Carrière’ and Wisteria floribunda ‘Alba’ were key plants, allowed to clamber freely up the ruins and through trees, or cascade over arbours, while white valerian, foxgloves and honesty were allowed to self seed in the paths and outcrops. ‘The garden is always on the brink of being lost to nature,’ says Dan. ‘It should be difficult to tell where it starts and the woodland begins.’ 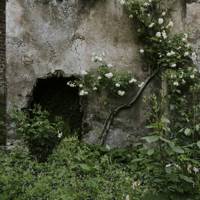 Filling an area of roughly five acres, the garden begins with a more formal entrance courtyard at the front of the villa, with sculptural pomegranate trees and clipped box domes, while evergreen camphor trees provide shade on the hottest days of the year. At the back of the house, the garden flows naturally down the slope with undulating lawns cocooned by trees. At the bottom, a tranquil pool reflects dappled light in the shade of two weeping cherries, with a nearby handkerchief tree echoing the cool green and white theme of the garden. The ruins of the ancient village jut skywards like giant fingers, sometimes unattached, marooned in a sea of greenery, and other times recognisable as buildings with window and door spaces still intact. Some of the walls have been left bare to gather a patina of moss and age, while others are draped in great curtains of greenery and roses. In one hidden garden room, enclosed on four sides by ancient walls, Dan built a raised rectangular pool to reflect walls and sky. 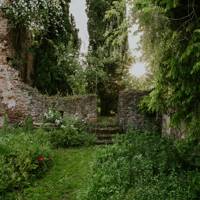 Over the next five years, Dan visited the garden twice a year and in 1999 he appointed Stuart Barfoot, a British gardener, to continue the work under his guidance. After the death of Violante in 2000, Stuart and Dan worked closely with Carlo to take the garden into its next phase. Carlo wanted more colour, so while maintaining the restrained palette near the house, Stuart introduced colour further down: a wildflower bank studded with cornflowers and chamomile; borders of velvet dark poppies; and an edging of clary sage, scarlet poppies and larkspur around the rectangular pool. Stuart worked at Torrecchia until 2007, when he left to study garden design in London, and not long after his departure, Carlo died, leaving the estate to his son Carlo Revelli and his wife Olivia. The new guardians of Torrecchia have fallen firmly under its spell, and with head gardener Angelo Mariani, who has been there since the early days, they are continuing to nurture the garden. ‘It is a garden that doesn’t fully show itself with the first visit,’ says Olivia. ‘I began to notice new elements every time I walked through it, discovering new perspectives and different light. It is mostly a spring garden, with an explosion of flowers, but each season offers something special.’ 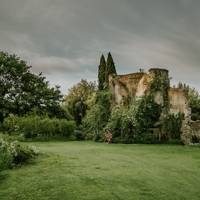 And as with any garden, its creation is ongoing. Carlo and Olivia are working with Dan Pearson again to open up a new part of the garden beyond the lower pool, where the ruins of a small medieval chapel are being cleared and restored. Having overseen the garden’s progress for two decades, Dan is happy to be involved once again to take it into another era. ‘I think, in a way, now that the garden has matured, its atmosphere is even more potent and arresting than it was when I first came here,’ he concludes. ‘It’s a unique place.’ 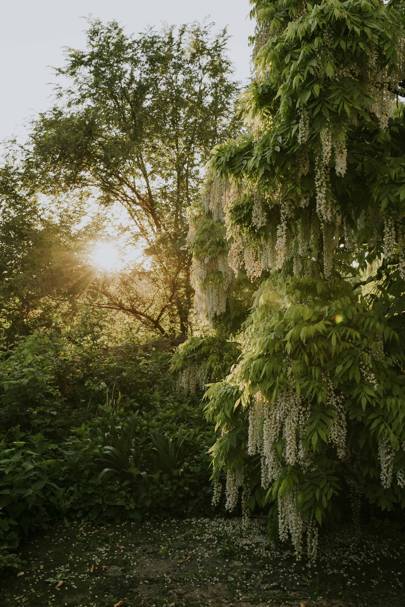 For more than 20 years, garden designer Dan Pearson has overseen the evolution of the garden at Torrecchia Vecchia near Rome from neglected wilderness to romantic paradise

A Garden for the Ages

In the Garden With: Stacy Bass

This Cotswolds garden is a topiary dream world

A Garden for the Ages

In the Garden With: Stacy Bass

This Cotswolds garden is a topiary dream world